TORONTO – November 8, 2019 – The slowing Canadian economy has resulted in the first year to year increase in business insolvencies in almost two decades, according to new data released by the Office of the Superintendent of Bankruptcy (OSB). The number of businesses that failed in the past 12 months to September 2019 was up 4.1 per cent compared to the same period in 2018. 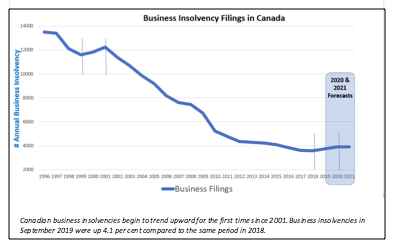 “The figures are evidence of a difficult period for some Canadian businesses,” says David Lewis, a board member of the Canadian Association of Insolvency and Restructuring Professionals (CAIRP), the country’s national association of insolvency and restructuring professionals. “After nearly two decades of business insolvencies consistently on the decline year over year, we’re are seeing an upward trend that will likely extend into at least next year.”

On an industry level, Mining, Oil & Gas Extraction, as well as the Information & Cultural Industries, sectors were the main drivers of the rise in corporate insolvencies over the past 12 months to September 2019. Both sectors experienced an increase in business insolvency filings of over forty per cent. The Finance and Insurance (+27.6) and Professional, Scientific, Technical Services (+20.6%) and Real Estate, Rental, & Leasing (+14.7%) sectors also experienced significant challenges. A few sectors, such as Retail Trade (-5.8%) and Transportation & Warehousing (-4.9%) showed modest improvement with fewer filings.

“The data shows a broad spectrum of businesses across the country that are challenged by the current economic climate. It is not simply the businesses in energy-producing regions that are struggling,” says Lewis.

Comparing the past 12 months to September 2019 with the previous year, there has been a double-digit increase in the number of business filings in Alberta (+9.9%), British Columbia (+23.4%) and Newfoundland (+70.8%). Ontario (+4.1%) and Quebec (+2.6%) experienced more modest percentage increases but together accounted for over eighty (83%) of the total business insolvencies in Canada over the past 12 months. Saskatchewan (-14.9%) is the only province to have experienced a decline over the past 12 months but for the past 3 months realized a 14.9% compared to Q3 2018.

“Uncertainties across the global economy have been a contributing factor to the increase, as are domestic struggles with increasing interest rates and high household debt contributing to a slowdown in spending. For many companies, an insolvency filing is an effective way to deal with stalled growth and unpayable debt,” explains Lewis. “We may start to see Canada’s unemployment rate creep up within the coming year if economic momentum continues to wane. Should that happen as expected, it could accelerate the already rising number of consumer insolvencies in the country.”

The number of consumer insolvencies (bankruptcies and proposals) for the 12 months to September 2019 increased by 8.5 per cent compared with the same period in 2018. The latest data also shows that the rate of increase is accelerating.

“There is a strong correlation between interest rate changes and consumer filings but we see a two to three year lag between rate increases and a growth in the number of insolvencies,” explains André Bolduc, board member of CAIRP. “Sustained increases in living costs and debt servicing costs has created an environment in which more people are struggling to stick to their repayment terms.”

A primary cause of personal bankruptcy is a high level of consumer debt coupled with an unexpected life event, such as the loss of a job, health issues, a major expense, divorce, or the death of a spouse. For Canadians who are already severely indebted, any unplanned increases in monthly expenses, including interest payments, can also be a catalyst.

“The credit bubble is certainly close to bursting for many more households and we expect the increase in personal insolvencies to continue and potentially accelerate over the next few years,” explains Bolduc. 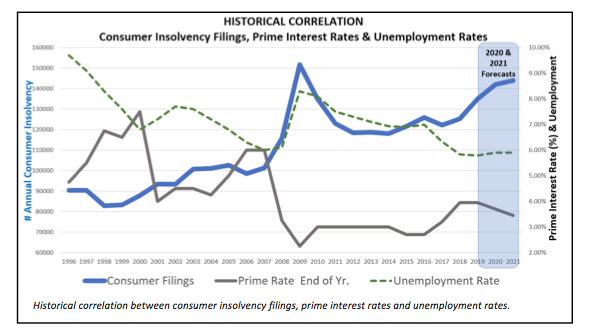