2019 saw the second-highest number of annual consumer filings ever in Canada
February 11, 2020

TORONTO – February 10, 2020 – The fourth quarter insolvency statistics released today provide a clear picture of accelerating insolvency rates in the country. About 375 Canadians filed a bankruptcy or consumer proposal each day in 2019 –– 137,178 Canadians –– the second-highest number of annual filings ever in Canada. Consumer insolvency filings rose 9.5 per cent in 2019 compared to the prior year, marking the fastest rate of increase since 2009.

“The sheer number of Canadians struggling with their finances is alarming but the growth in consumer insolvencies and the accelerating insolvency rate is a symptom of a bigger problem: many who have amassed unmanageable debts have no path out,” explains André Bolduc, board member of the Canadian Association of Insolvency and Restructuring Professionals (CAIRP).

CAIRP projects that consumer insolvency filings will continue to grow in 2020 as many Canadians across the country have amassed unmanageable debt loads. Some provinces are feeling financial stress more than others. Ontario led the way with double-digit increases in the number of consumer insolvency filings in 2019 (+15.4%) followed by Newfoundland and Labrador (+15%), Alberta (+14.6%), Manitoba (11.4%), and British Columbia (+10.34%). Three provinces experienced more moderate rises, including Quebec (+2.7%), PEI (+2.5%) and Saskatchewan (+1.6%).

“The increase in insolvencies is still partly the result of the interest rate increases that occurred during 2016 to 2018. We know that when the interest rate increases, the insolvency rate increases but there is a two to three-year lag,” explains Bolduc. “One of the reasons is that a lot of people struggle with debt for years before they seek financial help. That’s partly because many households bury their heads in the sand about the scale of their debts until something tips them over the edge – like a mortgage renewal or an unexpected expense.”

The good news, he says, is that many Canadians may be waking up to the risks of high debts loads and beginning to cut back on spending.

“If consumers continue to moderate their spending habits, this should help dampen the rate of increase in consumer insolvency filings,” says Bolduc.  “Although, moderated consumer spending may exacerbate the rise in business filings as Canadian businesses deal with lower sales growth and rising business debt levels.”

Annual business insolvencies rise for the first time since 2001

Equally concerning is a rise in the number of business insolvency filings. The fourth quarter of 2019 showed an increase of 9.7 per cent compared to the previous quarter, contributing to an overall 2.84 per cent rise for the year and marking the first year over year increase in business insolvencies in Canada since 2001.

Some provinces were harder hit than others, including British Columbia (+23.3%) and Manitoba (+39.3%). Collectively the Atlantic provinces realized a 38 per cent increase in the number of business filings. Alberta (+8.3%), Saskatchewan (+5.1), Quebec (+1.5%) has more moderate increases. Ontario bucked the national trend, realizing a decline of 3.7 per cent.

“After nearly two decades of business insolvencies consistently on the decline year over year in Canada, we are seeing an upward trend that will likely extend into at least next year,” says David Lewis, a board member of CAIRP who specializes in corporate insolvencies and is based in Alberta. “The increases are reflective of the headwinds faced by a variety of industries in Canada.”

Moderated consumer spending may exacerbate the rise in business filings as Canadian businesses deal with lower sales growth and rising business debt levels. With this in mind, CAIRP expects business insolvency filings to continue a slow rise in 2020.

“Businesses may begin addressing financial pressure by cutting discretionary expenses and reducing capital investment. For some, this will include reducing payroll costs and that will ultimately drive consumer insolvency rates up as well,” adds Lewis. 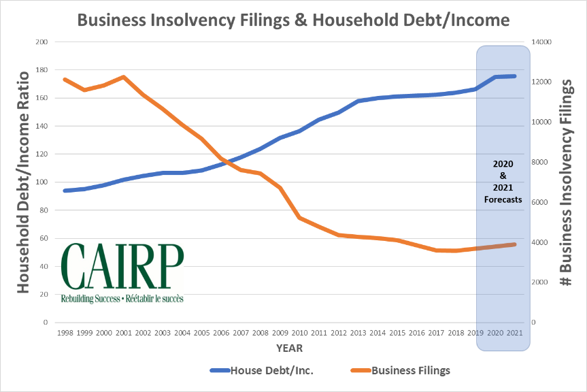